The development process for certain major updates in Mambu includes Alpha, Beta, and Early Access releases before the final release, which is generally available for all tenants. If you are interested in trying out new features and providing feedback, we encourage you to contact your Mambu Customer Success Manager to discuss the requirements.

Alpha releases are very early versions of the next major update. They may be made available months before the stable release. An Alpha feature means that the functionality is working and has gone through a rigorous quality assurance process but some pieces are missing and a number of known or unknown issues are likely to surface.

The main purpose of an Alpha feature is to allow selected tenants to test the functionality so that feedback can pass to the development team regarding:

Beta releases are early versions of the next major update. They follow the alpha release and are typically made available weeks before the final release. In Mambu, a Beta feature is used only in the API context. The functionality has had all major issues fixed and has been rigorously tested for an official release.

The main purpose of a Beta feature is to provide a fully functioning demo of the Alpha feature. This second round of feedback will help the development team to:

Please be Aware
For Alpha and Beta features, the API schema is subject to change. There will typically be a post on our Community page announcing the first Beta release.

With Early Access, we give you the option to try out new features that are still being refined by our product development teams. This means early access to exciting features that our team is building based directly on your feedback and requests.

It’s important to note that these features are a work-in-progress. They may be incomplete, or may change before being fully released.

How do we identify if a feature is Alpha, Beta or Early Access?

You can easily identify what features are currently in Alpha, Beta, or Early Access stages by going to the Administration tab and looking at the list of Available Features on the left hand side of the screen. 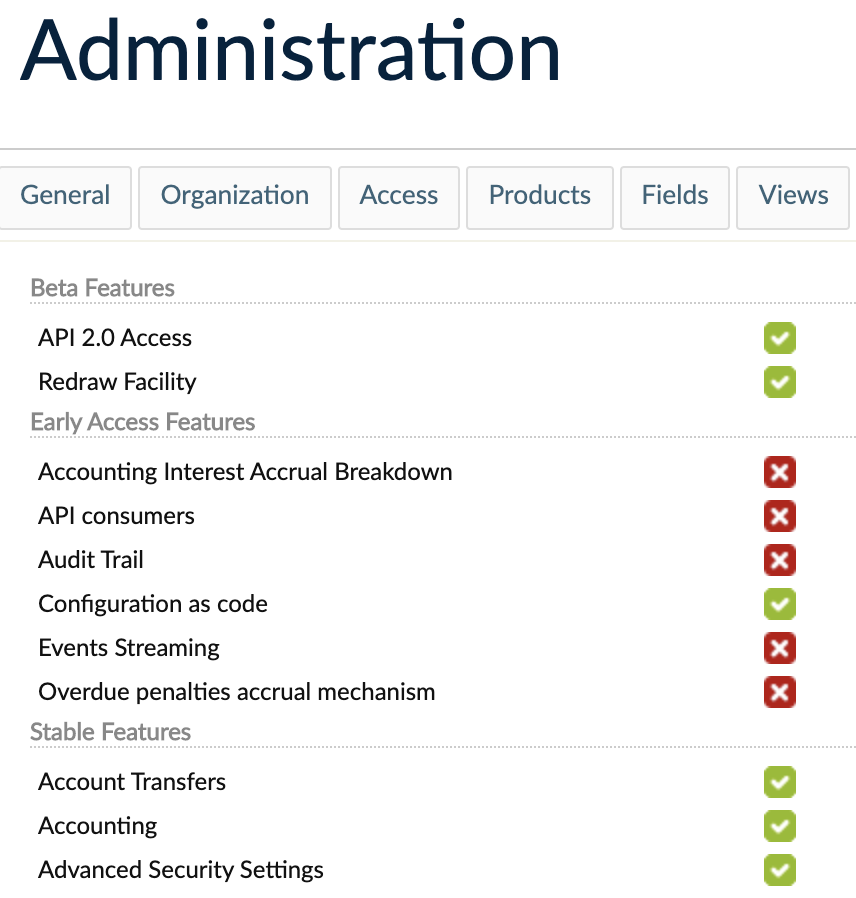 By default, most new features will be deployed as Generally Available. If the feature is released under the Mambu Feature umbrella, it will be added in the appropriate category of the Administration tab.

Please Note
Alpha, Beta, and Early Access features will be announced in the Release Notes.
Ask the Mambu Community

If you have a question about how anything works or have come across something you haven't seen explained here, get in touch with our community of fellow users and Mambuvians where someone will lend a hand.

Was This Article Helpful?

We use our own and third-party cookies to understand how you interact with our knowledge base. This helps us show you more relevant content and ads based on your browsing and navigation history.